A Window to History and Northern Taiwan's Gate

Keelung City is located at the northernmost tip of Taiwan’s main island. It was later renamed Keelung during the Qing Dynasty (1644-1911), and when the Nationalists came to Taiwan from mainland China following World War II they made Keelung a provincial city. This port city now boasts an area of 132.76 km2, of which 95% is hilly terrain. Bordered by mountains on three sides and facing out towards the sea, Keelung enjoys an excellent natural harbor with deep water.

The Port of Keelung is renowned throughout Taiwan, and worldwide it is a rare case in which the harbor area of a port city flows into the city’s downtown. Keelung currently has seven administrative divisions (or regions), as well as seven islands off the coast, which are Heping Island (lit. “Peace Island”), Zhongshanzi Islet, Tongpan Islet, Keelung Islet, Pengjia Islet, Mianhua Islet, and Huaping Islet. Heping Island (once known as Sheliao Island), Zhongshanzi Islet, and Tongpan Islet are now all connected by land and commonly collectively referred to as Heping Island. But, the scenery of mountains, sea, rivers, and the harbor will change depending on what area or island you are on, so you can plan a host of different sight-seeing routes. 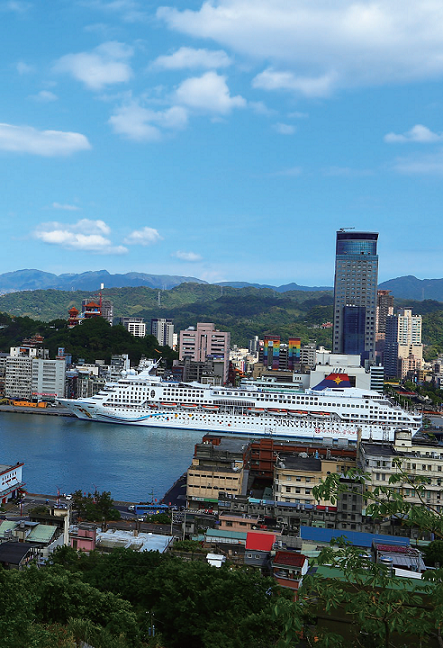 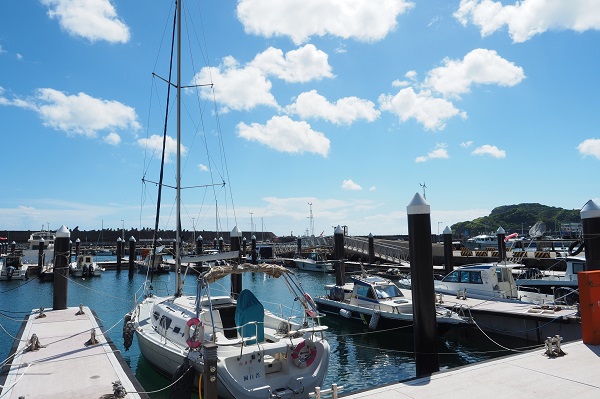 The gap on the blue circle of the city emblem represents Keelung Harbor and the surrounding environment. The green mountain signifies the hills in Keelung. The two Chinese characters, which read Keelung, use a special font to look like a container ship to represent the features of Keelung and our expectation that Keelung will become the largest container harbor in Taiwan following the development of marine transportation.

The city song of Keelung uses a song written by Master Mushih. The lyrics describe the splendid landscape and the prosperity of the city. The city song also encourages our citizens to cherish the accomplishments of our ancestors and work together to build a new Keelung.

Formosan sweet gum, the city tree of Keelung, belongs to the genus Liquidamba in the witch hazel family (Hamamelida-ceae). This deciduous tree has three-to seven-lobed palmate alternate leaves and head flower. This beautiful tree has a conical to broadly conical shape and a fast rate of growth.

Crape myrtle, the city flower of Keelung, belongs to the loosestrife family (Lythraceae). These deciduous trees have smooth and mottled trunks as well as pink, white and mauve blooms that usually appear in late summer. Its exquisite branch ramification makes crape myrtle a unique tree.

The eagle is chosen to be the city bird of Keelung as one can see eagles in many places in Taiwan, from the mountains to the coast. All you need to do is look at the sky, and then you will see an eagle flying.

An adult eagle is dark brown with hazel head and neck feathers. Tawny spots can be found on the head and abdomen. It also has large wingspread. Young eagles are light brown with clear spots. Eagles are found near seashores, estuary, lake and harbor. Keelung Harbor offers an excellent spot to observe eagles, which explains why the Wild Bird Society of Keelung chooses the eagle to be the bird of the Society. Eagles are an endangered species with less than a hundred remaining in Taiwan.

Black porgy is chosen to be the city fish of Keelung, its scientific name is Acanthopagrus schlegelii, inhabit at the depth of 3 - 50 meters, is found in the west Pacific Ocean, including the coast of Japan, Korean, Taiwan and mainland China. It is also found island wide in Taiwan and Penghu Island waters.

The black porgy belongs to warm, tropics coastal omnivorous benthic fish. It can be caught year- round, but it is exceptionally tasty during autumn to spring. It can be found in many fish market as high-quality table fish, because of its good flavor. It likes the habitat of inlets with sandy or muddy bottom, sometimes enter the river mouth. It is euryhaline and eurythermal, may be raised in any salinity. It can tolerate the water temperature ranging between l0 ~ 32℃. During the juvenile period all was the male, sex transformation progress until 3-4 year old.